The UK new car market contracted by 4.1% year-on-year in July, with 157,198 new cars registered, according to figures released today by the Society of Motor Manufacturers and Traders (SMMT).

This marks the lowest volume of UK new car registrations in July since 2012 and the fifth consecutive month of decline. The SMMT blames this on the ‘political and economic uncertainty and confusion over future government policy on different fuel types [which has] continued to knock consumer and business confidence’.

Autovista Group analysis of the latest registration figures also reveals that the seasonally-adjusted annualised rate (SAAR) has fallen to its lowest level so far in 2019. 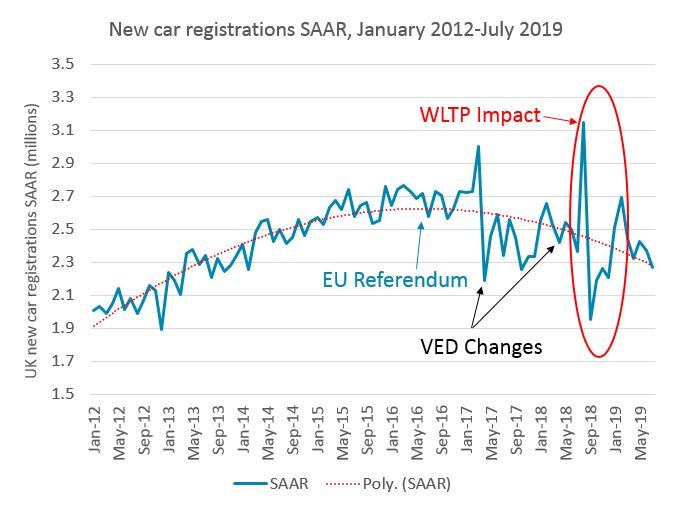 Delayed car deliveries, following the implementation of WLTP in September, bolstered registrations and masked the underlying downturn in demand earlier in the year. As supply has now normalised, this is no longer the case.

In the first seven months of 2019, new car registrations are down 3.5% year-on-year compared to the same period in 2018.

Registrations of battery electric vehicles (BEVs) surged by a massive 158.1%[WN1]  in July compared to July 2018. Although this is only 2,271 units, equating to a 1.4% market share, July saw their highest monthly market share on record. Registrations of new hybrid electric cars (HEVs) also increased, by a substantial 34.2%, but demand for plug-in hybrid electric vehicles (PHEVs) continues to decline dramatically (down almost 50%) following the withdrawal of government incentives. An updated grants package released last year means only BEVs now qualify for a £3,500 (€3,985) subsidy and despite the fall in PHEV sales, the Department for Transport has no plans to reinstate it.

‘Despite yet another month of decline in the new car market, it’s encouraging to see substantial growth in zero emission vehicles. Thanks to manufacturers’ investment in these new technologies over many years, these cars are coming to market in greater numbers than ever before,’ commented Mike Hawes, SMMT Chief Executive.

Declines were seen across all sectors in July, with private demand falling 2.0%, while deliveries for fleet and business customers were down 4.7% and 22.5% respectively. Luxury saloons and specialist sports cars experienced a rise in registrations in the month and the dual purpose segment (SUVs) enjoyed 12.8% growth to command nearly a quarter of the market. All other segments experienced declines in the month, with the biggest falls seen in the executive (-21.6%) and supermini (-12.1%) segments.

The SMMT forecasts that ongoing investment into new, ever more advanced powertrain technology will result in BEVs doubling their market share next year, with 51,000 registrations in 2020. However, this will still only represent 2.2% of the overall market. ‘For the UK is to meet its zero emission ambitions, we need world-class, long-term incentives, supportive policies and substantial investment in infrastructure, the SMMT said.

‘If the UK is to meet its environmental ambitions, however, government must create the right conditions to drive uptake, including long-term incentives and investment in infrastructure. The fastest way to address air quality concerns is through fleet renewal so buyers need to be given the confidence to invest in the new, cleaner vehicles that best suit their driving needs, regardless of how they are powered,’ Hawes added.