German new-car registrations dropped by 32.2% in June, compared with the same month in 2019. Some 220,272 new cars were registered, according to the latest figures from the automotive authority Kraftfahrt-Bundesamt (KBA).

This marks another marginal improvement for the German market, up from the 49.5% declines recorded in May and 61.1% in April. These latest figures put Germany ahead of Spain, where registrations declined by 36.7%, but behind France which saw an increase of 1.2% and Italy which recorded a decline of 23.1%. 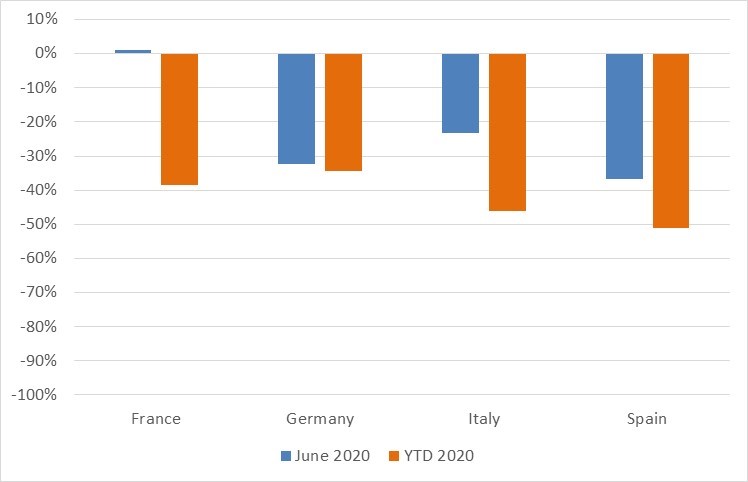 Brands and types broken down

Compared with June last year, registration figures were down for all German brands. Porsche recorded the smallest decline at 0.5%. The decline at Mercedes-Benz was also in the single-digit range at 8.7%. For other brands, drops ranged from 23.8% for Mini to 83.6% for Smart. With 17.8%, VW again achieved the largest share of new registrations in June.

Some 21% of all new cars came from the compact class, which came out as the strongest segment. SUVs followed in second place with 19.9%. On a half-yearly basis, the balance of these two segments came out at a 20.3% share of new registrations each. Small cars (14.7%) and off-road vehicles (11.2%) also reached double-digit new registration shares in June. The declines in new registrations extended across all segments, with losses ranging from 14.3% in the luxury class to 63.4% in the minivan segment.

France saw its first increase in passenger-car registrations for over six months, as the country’s automotive market bounced back into life. Some 233,820 new cars were registered in June according to the CCFA, an increase of 1.2% compared to the same period last year.

Meanwhile, both Italy and Spain recorded further declines during the month, although these figures show promise that their markets are recovering. In Spain, registrations declined by 36.7% in June, and is down 51% year-to-date, according to industry body ANFAC. Italy did see a smaller drop, with the country’s automotive body ANFIA announcing a decline of 23.1% in the month, and a drop of 46.1% year-to-date.

Monthly performance of Spain, Italy and France registrations from January to June 2020 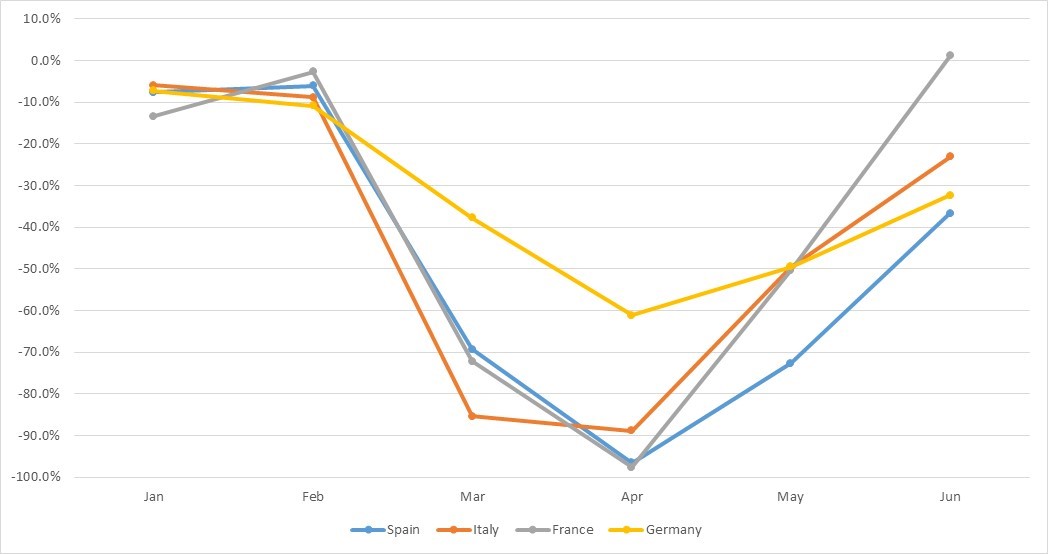 The French numbers are a beacon of hope for other markets that incentive schemes can work. The country’s €8 billion package includes a €7,000 grant for BEVs costing less than €45,000 (up from the standard €6,000 premium). Meanwhile PHEVs can claim a €2,000 subsidy.

France also doubled its premiums for those looking to trade in their older vehicles for a cleaner model, with a €3,000 grant for internal combustion engine (ICE) vehicles and €5,000 for BEVs. This means drivers could get up to €12,000 off the list price of a zero-emission vehicle.

In June the German Government announced its coronavirus (COVID-19) economic recovery package which leant heavily into incentivising green mobility. Schemes to boost the sales of low- and zero-emission cars were partnered up with investments into green transport infrastructure. Conversely, petrol- and diesel-powered vehicles did not feature in the package.

The federally-backed buyer incentive scheme doubled to €6,000 for battery-electric vehicles (BEVs) and hydrogen fuel-cell electric vehicles (FCEVs) costing less than €40,000. When paired with a manufacturer bonus of €3,000, customers were given the potential to save €9,000 on a zero-emission cars. More expensive BEVs and plug-in hybrids (PHEVs) receive slightly lower subsidy rates as part of the package. These incentives look to be available until December 2021.

New-car buyers will also benefit from a lowering of value-added tax (VAT) to 16% from 19% between 1 July and 31 December 2020. This was one of the few measures announced that also applies to diesel- and petrol-powered vehicles.